Story and Photos by Julia Browne, Walking The Spirit Tours

The Latin Quarter teems day and night with visitors gazing at Notre Dame Cathedral, poking through the bins of books and music around the Sorbonne, or chatting and people watching in sidewalk cafes. What many don’t realize is that, hidden among these favorite Paris past-times and across the city, there exists more than a century of vibrant African-American history.

Paris. Nowhere else in the world were Black writers, artists, musicians, and intellectuals able to nurture and display their talent unfettered by the racism they experienced in the United States. The result is a legacy of fantastic, groundbreaking cultural exchange that has enriched both the American and French cultures.

Taking the miniscule sidewalk of Quai St Michel and heading away from Notre Dame, the tiny Rue Git-le-Coeur leads to the site of the former rooming house where Chester Himes came up with his first detective novel. The French devour the detective genre, and awarded the book (which became the movie, A Rage In Harlem) a top literary prize in 1957. His series sold like hotcakes, affording him a penthouse apartment in neighboring upscale St.Germain-des-Pres. 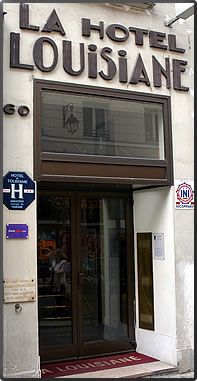 Since the 1920s, La Hotel Louisiane’s guest list has been a who’s who of the music, art and literary world. Among frequent guests was Miles Davis, described by the French culture minister as “the Picasso of Jazz”.

For centuries the Left Bank has been home and muse to writers. For African-American expatriates, it was along these cobblestone streets that they gained perspective and freedom of movement to reflect on their lives before and during their Paris years. James Baldwin arrived penniless in 1948, an unlikely motivator that fueled some finely observant essays, including his Notes of A Native Son (1955). And wherever he wrote he made home, be it grungy lodgings in the former marketplace that was Les Halles, a cold water flat one block from the River Seine or a bit too close to the bells of St Sulpice church.

During that same effervescent yet politically turbulent period, Richard Wright spent hours debating with intellectuals Jean-Paul Sartre and Simone de Beauvoir in the famous literary cafe hotspots, Cafe de Flore and Deux Magots, and the American-frequented Cafe Tournon near the Luxembourg Gardens. New ideas from these enlightening discussions injected his future novels and essays with a more global outlook. Through Wright, the French intellectuals and press gained first hand knowledge of the African-American experience at home and further sided with the Black American plight. An honorary plaque identifying Wright as “L’homme de lettres Noir American” stands outside his former home on Rue Monsieur LePrince.

Cafe de Flore was a lively place of discussion for African-American and French intellectuals. 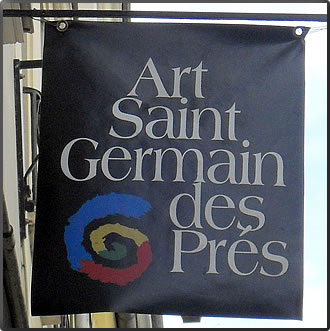 This famous arts district near the Louvre Museum was home and studio to several African-American artists.

But the post-WWII writers weren’t the first to take advantage of France’s creed of freedom, equality and brotherhood. Anna Julia Cooper earned her PhD at the Sorbonne in 1925 at the age of 67. Across town, near the Champs-Elysees, W.E.B. DuBois, founder of the NAACP (National Assn for the Advancement of Colored People), created a groundbreaking exhibition for the 1900 World’s Fair held at the Petit Palais museum. His goal was to correct the stereotype that all American Blacks still lived in post-slavery poverty. The resulting exhibition of photographs showed off a thriving Black middle and upper class and won a gold medal.

Paris was the center of the art universe at the turn of the 20th century. Students of all nationalities flocked to the new art schools that took the overflow from the University of Paris’ Faculty of Fine Arts in St.Germain-des-Pres behind the Louvre. This arts district was home and studio for several African- American artists also seeking to infuse their work with the European sensibility. One such was Philadelphian Henry Ossawa Tanner on Rue de Seine. Tanner may have had to bear public humiliation at art school in his native U.S. because of his race but in Paris, his prize-winning painting ‘The Rising of Lazarus’ became a beacon of exceptional talent as it adorned the hallowed walls of the Louvre in the early 1900s. Dozens of young African-American artists such as Palmer Hayden, Archibald Motely, Meta Vaux Warrick and Hale Woodruff tapped on his door for advice during the 1920s and 30s.

While browsing the eclectic galleries that line Rue de Seine, stop for refreshment or a traditional meal at La Palette on the corner of Rue Jacques Caillot. Regulars James Baldwin and painter Beauford Delaney also gazed at the same time-warp dark interior, brightened by dozens of original paintings hanging from the mahogany walls.

Jazz, of course, is the most well-known point of cultural exchange between Black America and France. It marched into French hearts during World War I by the Harlem Hellfighters soldiers/jazz band and has never left. During the Roaring 20s, African-American musicians, entertainers, writers, and entrepreneurs flocked to the Lower Montmartre district, just south of the bawdy Moulin Rouge, turning the sloping streets into a vibrant African-American community. There’s no sign of that influential community today but for history’s sake it’s worth taking the short jaunt from Place Pigalle to pay tribute to the golden block where Black music nurtured a radical change in French arts and culture then turned this city into the jazz capital of Europe. 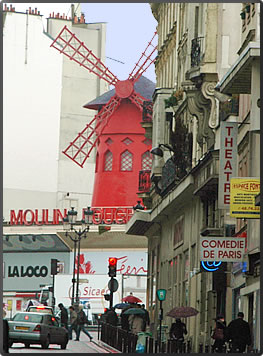 The Moulin Rouge district was a hotbed of jazz music as early as World War I.

During those early days, clubs in Lower Montmartre could hardly satisfy the public’s craving for this nimble music that helped people forget wartime hardships. While the French owned several of the major venues, the very best clubs were managed or owned by African Americans.

On the corner of Rue Fontaine and Rue Pigalle, a fiery redhead named Bricktop spun the latest records, taught the Prince of Wales to Charleston, and spurred a rivalry between F. Scott Fitzgerald and Cole Porter. She also allowed fresh-faced French musicians, Stephane Grapelli and Django Reinhardt, to soak up the new music night after night until they went on to form the first professional French jazz quintet. On that same corner, young Langston Hughes created the first jazz poetry while he washed dishes in the club’s kitchen. Just up the block, amidst dozens of traditional cabarets, the Queen of Parisian Nights, Josephine Baker dazzled in her own ‘Chez Josephine’ restaurant. 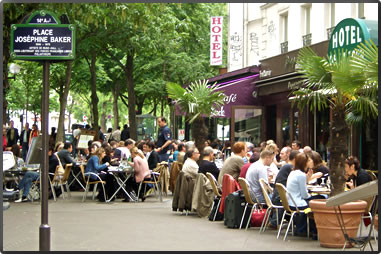 Of all the African-American expatriates, Baker left the deepest mark on France and Paris. Not just an entertainer, she became a French citizen in 1937 and was awarded several medals for her spying and assistance in the French Resistance movement during WWII. She was also admired for her humanitarian spirit in adopting twelve children of different nationalities. A fitting marker stands in her honor at Place Josephine Baker one block east of the Montparnasse Tower near the site of her last concert.

Though most of the post-WWII jazz settled into the intimate clubs of St.Germain-des-Pres, the Latin Quarter, and around the Champs-Elysees, few of the originals remain. At the Caveau de la Huchette, however, a stone’s throw from Notre Dame Cathedral, fans are still dancing to the swing and big band sounds of Sidney Bechet and Louis Armstrong. All styles of jazz ring out these days in clubs around Les Halles, Montparnasse, live performances on street corners and during the many jazz festivals. And don’t be surprised at the posters for African- American-inspired gospel, now dominated by French and African groups, as well as rap and hip hop. 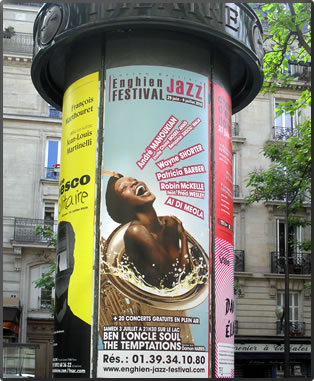 Follow Up FactsWalking The Spirit Tours, www.walkthespirit.com, is the longest running Black heritage tour company in Paris. Since 1994 its in-depth tours have brought alive 200 years of the rich cultural exchange between Black writers, artists, musicians, intellectuals, entertainers and France. Today the company also designs customized itineraries that include hand-picked selected historical, cultural and gastronomic tours, themed packages and full travel planning services focusing on France, Europe, UK and North America.
Paris based tours are described in detail on the Tours webpage under the titles of Tours offered: among them are the Writers, Artists & Intellectuals Tour, the Entertainers Tour and the Africa In Paris circuit which takes an enlightening exploration of the city’s Diaspora relations through today’s African and Arabic community. A combination of these tours is available by private coach for groups and individuals. Customized itineraries are also very popular.
Venturing outside Paris, Walking The Spirit Tours organizes and escorts excursions to Josephine Baker’s former chateau in the Dordogne, Richard Wright’s Normandy retreat and other cities with key Black history such as Nice, Nantes, Bordeaux and the Champagne Region. All guides are local African Americans and Afro-Parisians selected for their expertise, their great storytelling skills, and their intimate knowledge of the neighborhoods in which they tour. Through a network of passionate partners, Walking The Spirit Tours offers Black heritage tours, trips and experiences in the UK, Europe, Canada and Washington DC.
About 60% of clients are older travelers, and more than 40% are referred by word of mouth. While the vast majority of clients are Americans, Europeans and Canadians are also developing enthusiastic curiosity about these tours. They come from all backgrounds and ages.

Julia Browne is a travel professional, consultant, lecturer and associate producer. After studying with the late Professor Michel Fabre, creator of the Centre for African American Studies at the Sorbonne Nouvelle, she created Walking The Spirit Tours in 1994 to keep alive the inspiring but little-known stories of Black Paris. Julia lived in Paris for more than a decade. Now expanding in Europe and North America, she puts her passion into helping individuals, educational institutions and travel agents make trip planning stress-free and enjoyable. Email: info@walkthespirit.com

Editor’s Accommodation Choice in Paris
Redesigned in 2002, the whimsical boutique Hotel Mayet, www.mayet.com, is a home-away-from-home that makes you smile the moment you cross the threshold. With 23 small rooms on six narrow floors, each room is decorated in red and gray, with custom-designed office furniture from filing cabinet bedside tables to lighting and even the ceiling fan. Public spaces figuratively jump with colorful murals, comfy furniture and crazy carpets, and the lovely vaulted cellar (below) with its rough-stone walls makes a perfect room for the hotel’s included continental breakfast. There is a reliable elevator, but don’t expect to load more than two people at a time or one person and one large suitcase! 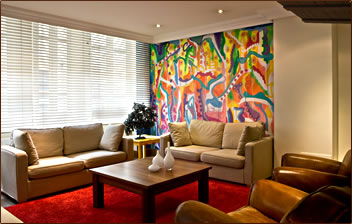 Staff are exceptionally helpful, all speaking English, and volunteering information about every aspect of Paris as well as providing helpful free services including WiFi, a computer for guest use in the lobby, and printing of reservations and boarding passes where needed. Daily news summaries are also printed for guests in several languages.

Serving the independent traveler, Hotel Mayet has a large repeat clientele, mostly from the UK, the US and France itself. Located in the neighborhood of Les Invalides, 6th arrondissement, it is just three blocks from the subway/metro … five stops later you are whisked into the heart of the old city, Notre Dame Cathedral and Ile de la Cité.