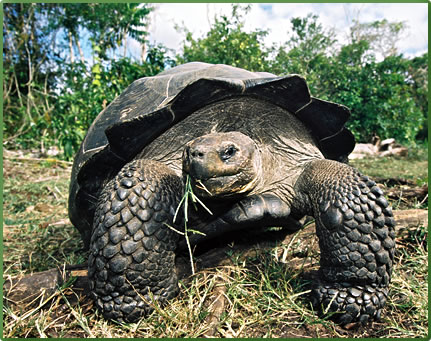 Over the 2008 Galapagos Islands eco-cruise season, Ecoventura’s six naturalist guides asked each guest at the end of their trip to identify their top five wildlife encounters. Over 3,000 guests participated in the polling. Comments and results were tabulated at the end of the season and in March 2009 the wildlife “winners” were announced. Four exotic birds and a giant tortoise made the final cut.

With 27 species of reptiles, 29 types of land birds, 19 different sea birds and dozens of land and marine mammals, there must have been pretty tough competition. Here is some information about each of the Favorite Five:

Red-footed Booby (Sula Sula Websteri) – With their distinctive red legs and feet and a bill and throat pouch colored pink and blue, the smallest of the three Galapagos boobies is best seen on the northern Island of Genovesa (Tower) where over 100,000 come to nest in the trees. Their elaborate greeting rituals include harsh squawks and the male’s display of his blue throat. They are powerful and agile fliers, but clumsy in takeoffs and landings. 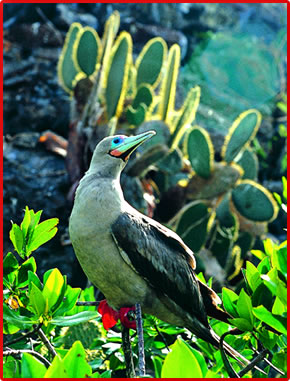 Flightless Cormorant (Nannopterum Harrisi) featured in the movie Master & Commander is the only grounded cormorant in the world, having lost its ability to fly. It is found on the western-most island of Fernandina and is endemic to Galapagos. They swim to hunt for food and do an aquatic dance while mating. Nesting takes place on the beach, just above the water line and the nests are made from flotsam and jetsam, held together by seaweed.

Uncharacteristic of Galapagos sea birds, the flightless cormorant does not mate for life. In fact, after the eggs are hatched and the chicks partially raised, the female often takes up with another male, leaving dad to raise junior on his own. Fernandina is the youngest and most pristine island in Galapagos and also home to the largest marine iguanas found in these islands. 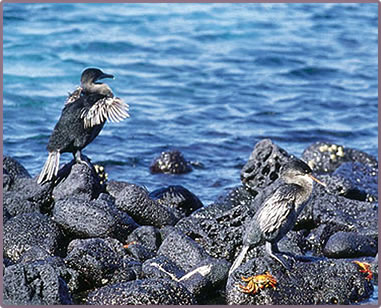 Galapagos Penguin (Sphensicus Mendiculus) inhabits the islands of Bartolome and/or Tagus Cove, Isabela. It is one of the world’s smallest penguins to breed entirely in the tropics and the only penguin found in the northern hemisphere. Technically they do fly but most folks see them underwater darting about in search of herring and mullet while guests are snorkeling. Classified as “endangered” with possible extinction in its future, the Galapagos Penguin’s total population is thought to number around 1,000-1,300 pairs in the islands and they do mate for life. Bartolome offers an excellent snorkeling opportunity around Pinnacle Rock, the most photographed site in Galapagos. 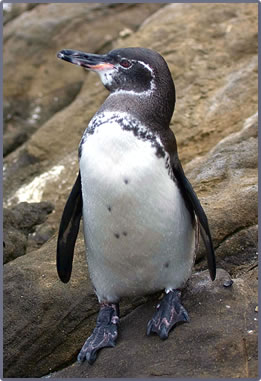 Galapagos Giant Tortoise (Geochelone Elephantophus) – Of all the wildlife, it is the giant tortoise that most symbolizes the Islands and has given them their name. Found on several islands in Galapagos, 11 of the original 14 sub-species still exist. Lonesome George from the Island of Pinta and the last of his race came from Charles Darwin Station in 1971 and was penned with two females from a different subspecies. Attempts to mate him were unsuccessful until 2008 but then the eggs were all infertile. Tortoises live to be 150 years old and take 40 years to become sexually mature, so there is still hope that George could produce offspring. 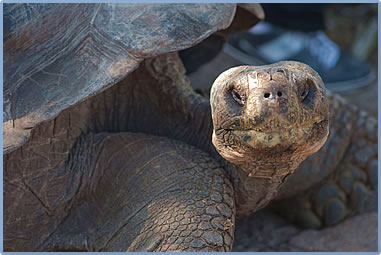 Waved Albatross (Diomedea Irrorata) is the largest bird in the islands, weighing up to 10 pounds with a wing span of eight feet. Starting in April, the entire adult population (over 10,000 pairs) arrives on the Southern Island of Espanola (Hood). They immediately create offspring that need to be fledged by December when they migrate back to the mainland due to changes in the food supply. Only a single egg is laid, and it is rolled around by the parents even though it risks cracking. After a 60-day incubation period the chick is hatched and then takes 167 days until it is fully fledged. Regarded as elegant and efficient fliers, Waved Albatross need to jump from a cliff to get airborne. Mating for life, these birds perform an elaborate courtship ritual of circling and clapping, a dance that is more like a waddle that ends with an upraised bill and “moo” noise. 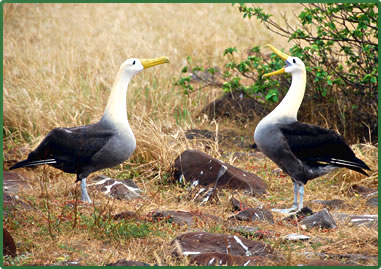 Ecoventura is a family-owned company based in Guayaquil, Ecuador, with offices in Quito and Miami. In operation since 1990, this Galapagos Islands nature cruise company hosts 4,000+ passengers annually aboard a fleet of three expedition vessels that are identical, superior first-class 20-passenger motor yachts with 10 double cabins.

The company also operates the Sky Dancer, a 16-passenger live-aboard dive boat offering 7-night weekly itineraries visiting the northern islands of Wolf and Darwin. All of its vessels have been purposefully retrofitted to meet or exceed the highest possible environmental standards. To reserve a cabin or private charter, or to receive an Ecoventura’s catalog, call toll-free 1.800.644.7972, or e-mail info@galapagosnetwork.com. For current rates, schedules and itineraries visit www.ecoventura.com.

Ecoventura is debuting the region’s newest ship in early 2016, It is the most comfortable, eco-friendly 20-passenger yacht operating in the Galapagos, reflecting the company’s leadership in social and environmental responsibility.

Ecoventura was the 2009 winner of Conde Nast Traveler magazine’s 15th Annual World Savers Award in the category of Cruise Lines. The award listed four distinct areas where Ecoventura is a pacesetter in responsible tourism: granting scholarships to Ecuadorian students interested in environmental and marine conservation; funding a micro-enterprise for fishermen’s wives helping convert a boat into a restaurant and boutique; operating the first hybrid power yacht in the Galapagos with solar panels and wind turbines that reduced carbon emissions by 10%; and paying the salaries of physical therapists and sign-language teachers at a school in Galapagos.

Through Ecology Project International, Ecoventura launched a new career shadowing program in 2012 that thus far has allowed four students living in Galapagos to experience a week-long cruise on the MY Letty while observing and working alongside Ecoventura naturalist guides who served as mentors. Ecoventura also sponsored 12 local students who experienced 50 hours of hands-on field study. The goal is to motivate students to assume leadership roles in dealing with the islands’ natural, social and economic resources.
Photo: Ecoventura’s M/Y Eric near Leon Dormido (Kicker Rock). Ecoventura

ROW’s Galápagos Islands Adventure Tour, “Galápagos Unbound” is a multisport sustainable, eco-tour vacation and the first of its kind offered in this tropical archipelago. This 10-day trip is a ground level encounter with the wildlife and scenery of these islands from behind a paddle while staying in an exclusive beach camp and in local hotel accommodation. Snorkeling, hiking, and kayaking through the Galápagos are all included.

ElderTreks specializes in 50-Plus curious adventurers who enjoy small-group educational travel. Its 11-day Galapagos and Ecuador tour, including two internal flights between the mainland and the Galapagos Islands, 7 nights aboard a small-ship yacht cruise and highlights of Ecuador’s mainland culture and dramatic Andes scenery while based in the capital city, Quito.