by Alison Gardner, Editor Travel with a Challenge

In 1988 the Mayan city of Chichén Itzá joined an exclusive list of United Nations (UNESCO) World Heritage sites, selected for their cultural and historic uniqueness. Here was a proud moment for Mexico to have one of its most prominent archaeological attractions in the heartland of the Yucatan Peninsula appear on what was then a very slim list deemed to be of “outstanding universal value” by a team of respected authorities. Each year since, additional sites around the world have been chosen for the list though, even 21 years later, the global cultural heritage UNESCO list stands at less than 700 sites in total.

For travelers and tour operators with an interest in history, archaeology and distinctive cultures, such a pre-screened, authenticated checklist provides strong affirmation that any one of these sites is a destination worthy of vacation interest.

So when you reach the top, what do you do for encores? How about getting selected by an estimated 100 million people across the planet as one of the New 7 Wonders of the World? (See box below for more information on the project.) In a 2007 history-making event only made possible by internet technology, Chichén Itzá received this remarkable honor from a short list of 21 finalists. No further encores seem necessary!

On July 10, 2007 an estimated 1.6 billion viewers in more than 170 countries tuned in to watch a much-anticipated ceremony in Portugal that announced the manmade/cultural New 7 Wonders of the World.
Mexico’s Chichén Itzá, Brazil’s Christ Redeemer statue, China’s The Great Wall, Peru’s Machu Picchu, Jordan’s Petra, Italy’s Roman Colosseum and India’s Taj Mahal were selected for this honor by an estimated 100 million voters. By contrast, the Seven Wonders of the Ancient World that we memorized in grade school were compiled by just two respected scholars more than 2,300 years ago!
The selection of the New 7 Wonders was made via the Internet and cell phone Short Message Service (text messages) in a history-making action. Never before have so many people participated in any global decision. Voters selected from 21 finalists previously short-listed out of 77 picked by a jury of renowned architects and ex-United Nations Educational and Scientific Organization (UNESCO) chief Federico Mayor.
The original list of Ancient Wonders, also all human-constructed, was concentrated in the Mediterranean region and six of the wonders no longer exist. Only the Egyptian Pyramids of Giza remain in tact as the sole representative, a fact honored by the New 7 Wonders committee which designated the pyramids as an honorary 8th winner in the new contest. By contrast, the most recent competitors were drawn from around the world and included some of tourism’s most important icons.

As more facts each year are being revealed about the Mayan civilization, there is growing respect for its intellectual sophistication, engineering expertise and sheer longevity of empire. Though Mayan rule was strong through several Central American regions and Mexico’s entire Yucatan Peninsula, Chichén Itzá was undoubtedly one of its most powerful, inspiring centers spiritually, artistically, intellectually and commercially for the 700 years during which the city was created and occupied. Though only eight kilometers of the 25 square kilometer area it covers are open for public viewing, that is quite enough to appreciate the diversity and magic of Chichén Itzá, the second most visited archaeological site in Mexico.

Part of the magic lies in this site’s often illusive, sometimes contradictory story that modern archaeologists continue to untangle as they bring new revelations and speculations to light. One that intrigues both visitors and historians is why these powerful, successful Mayans suddenly abandoned such a magnificent painted city forever some 300 years before Europeans stepped ashore on the Yucatan Peninsula. You can’t blame the Spanish on this one!

Both local tour guides and the dramatic sound and light show presented nightly do their best to separate fact from fiction, or even suggest a few mysteries of their own. Chichén Itzá has attracted inquisitive foreign visitors since the 1920s when a Mexican entrepreneur with great foresight opened the landmark Mayaland Hotel. Its lush manicured grounds teaming with birds and its private garden entrance to the site’s main plaza give it a sense of exclusivity to this day.

Playing host to great operatic tenors like Placido Domingo (in 2008) and Luciano Pavarotti (in 1997) when they each performed at the archaeological site, the Mayaland has graciously overseen the comings and going of the great and humble for 87 years. Staying in the room where Placido Domingo slept (semi-detached Villa 5), I have to say that it and its bathroom were surprisingly small and modestly furnished for such a famous visitor. In contrast, Luciano Pavarotti insisted that a two-storey building the size of a motel be erected on the grounds for him and his entourage a decade earlier.

Since the 1980s, Chichén Itzá’s Spring and Fall Equinox Festivals have been gaining popularity, currently attracting more than 10,000 people per event. It centers on a precise seasonal phenomenon of the sun’s rays projecting the light-and-shadow image of a sacred snake undulating down the perfectly-designed geometry of El Castillo pyramid to connect with the snake’s carved stone head at ground level (see photo at the left). For many, this has profound spiritual significance, while for others it is a reminder of the mathematical genius of the Mayans whose sophisticated knowledge of astronomy and architecture are perfectly blended in this phenomenon.

As Bernard Weber, visionary behind the New 7 Wonders concept, declared, “If we want to save anything, we first need to truly appreciate it”. While a certain appreciation can be achieved by long distance study, seasoned travelers understand that there is no substitute for the personal encounter whether awesome or intimate. Chichén Itzá clearly leans towards the awesome, but there are also a host of intimate glimpses and insights to be found if you linger and look for them. 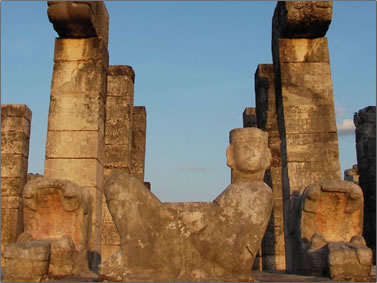 Caption: Reclining Chacmool human figures of various designs with heads up and turned to the side are found throughout Central Mexico and Yucatan.Yucatan Tourism Board
For detailed information about the Chichén Itzá site and individual Mayan structures restored for public viewing, see http://en.wikipedia.org/wiki/Chichen_Itza.
On the Caribbean/Atlantic coast, Mexico’s Yucatan Peninsula consists largely of the states of Yucatan (where Chichén Itzá is located) and Quintana Roo. To explore either state, international visitors usually arrive by way of the Cancun Airport and fan out from there. For complete holiday travel information on Yucatan State, click here; visit the Riviera Maya website for travel information on Quintana Roo State, showcasing the Yucatan Peninsula’s Caribbean coast as far south as the Belize border.
In our Travel Article Library, also see our colorful companion article about Quintana Roo travel (south of Cancun to the Belize border), with spotlights on unique natural attractions, the Mayan sites of Tulum, and eco-friendly accommodations along this rewarding, lesser-known vacation route.

Alison Gardner is a travel journalist, magazine editor, guidebook author, and consultant. She specializes in researching vacations throughout the world, suitable for people over 50 and for women of all ages. She is also the publisher and editor of Travel with a Challenge Web magazine, www.travelwithachallenge.com. Email: alison@travelwithachallenge.com.