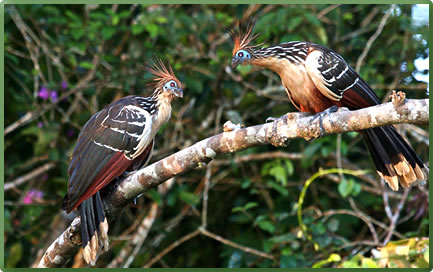 Pheasant-sized hoatzins with their small heads and big bodies get the nickname, Stinkbird, from their manure-like odor. ©Jorge Salas/International Expeditions

Yikes! It’s not often that a pink-toed tarantula seeks to make your acquaintance. One did just that, however, when it casually hopped on board our skiff as we began to pull away from the bank of the Ucayalli River in the northeastern Peruvian Amazon.

George, our local naturalist guide with a mile-wide grin, laughed and said, “Expect the unexpected in Peru.” He calmly let Pink-Toes parade along his arm as fourteen cameras immediately zoomed in on our beguiling hitchhiker. “Don’t be afraid. The tarantula won’t hurt you unless it feels threatened,” George counseled, passing our visitor among several brave passengers for a stroll on their caps, arms, and vests (Not me!).

Pink Toes is just one of many unexpected pleasures that my husband, David, and I encountered on our International Expeditions cruise aboard the 28-passenger La Amatista as it motored 400 miles/644 kilometers up the Ucayulli River to the Pacaya Samiria Natural Reserve, and back. If supersized bugs, jewel-like birds, acres of rainforest, and one giant anaconda of a river whet your appetite for adventure, the Peruvian Amazon belongs right at the top of your bucket list. 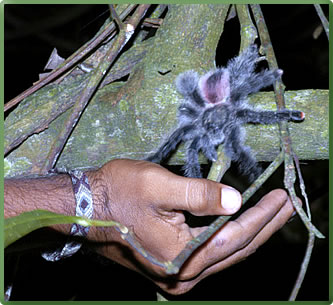 Pink-toed tarantulas are friendlier than one might expect given that they paralyze their prey with venom. ©David F. Stafford 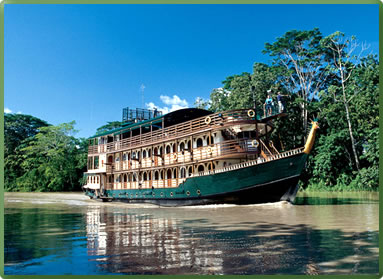 La Amatista, a wooden replica of the 19th century riverboats owned by the area’s rubber barons, evokes a by-gone era, but is a comfortable floating home for the seven-night/eight day cruise. Air-conditioned, wood-paneled cabins with ample storage for clothes and gear, electricity, and ensuite bathrooms with hot and cold water mean we’re beating the heat and humidity in style.

Buffet meals tempt us with Peruvian specialties such as lomo saltado (marinated steak with a chile kick, topped with French fries), quinoa (a cereal grain) studded with super-sized kernels of maize, fresh fish, and local produce such as yellow tomatoes, hearts of palm, and yucca. The dining room’s wrap-around panoramic windows mean we don’t miss a minute of the passing river show.

La Amatista’s third level offers an ample open-air bar/lounge for catching a tan or lazing with a book. In the evening, our traveling companions aged 14 to 70 plus, all kickback with a tart Pisco Sour or a bubble-gum sweet Inka Kola, and enjoy the musical talents of our energetic crew on the zampoña (panpipe), cajón (a box drum), and charango (a small guitar). 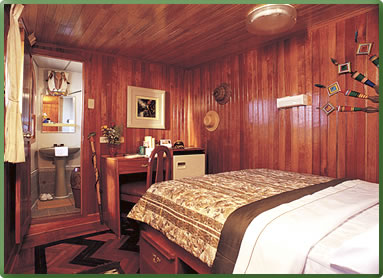 The Pacaya Samiria National Reserve
This 2 million hectare/5 million acre protected area is the largest wetland reserve in the world. Set aside in 1940 to preserve wildlife and fauna, Pacaya Samiria became one of Peru’s nine National Reserves in 1982. Scientists have documented more than 250 species of fish, 449 bird species, 150 reptiles and amphibian species, and 22 species of orchid. One of its most successful conservation programs, the hatching program for taricaya and charapa turtles, has released nearly 450,000 turtle hatchlings into the wild.

The “clang! clang!” of the ship’s bell and George’s shout of “Are you ready for adventure?” propel us out of our cabins onto the two small excursion skiffs. At least twice daily, we explore the tannin-stained offshoots of the main river, take a nature walk, or visit a riverside community with our local naturalist guides. Excursions get underway in the early morning or late afternoon to escape the peak of the sizzling heat (95º F/35º C or more) and shirt-soaking humidity. One of our first outings, a short hike through the rainforest at Yucuruchi, leads us to a pond of serene green giants: Victoria Amazonica, the enormous water lilies whose pads can span up to 6 feet/1.8 meters or more. Each night, their buds gently enfold the small beetles essential to their pollination and release them the next morning after the insect’s work is done. 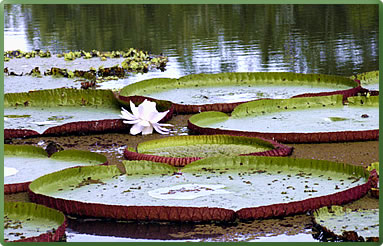 The flowers of these giant water lilies last only 48 hours, changing from white to pink to reddish purple as they mature. ©David F. Stafford

Later, we pull into a shaded, narrow tributary to try our hand at fishing for the fiercest fish in the Amazon. George cautions, “Watch your fingers! You want to catch the piranha, not be their snack!” With a stripped tree branch for a fishing pole, a line, and a bit of meat on a hook, these glistening purple, orange, and white flesh-strippers become just one more trophy catch. I secretly gloat over my victory as I sink my teeth into the piranha’s meaty, but bony, carcass later at dinner. On daylong trips aboard the skiffs, we probe deep into the Pacaya Samiria National Reserve, also known as “Espejo de la Selva” (mirror of the jungle) because of the reflective quality of its black lakes and lagoons. Along the riverbanks, the rainforest canopy forms a giant open-air aviary. Black-collared hawks eye us silently, scanning the river for prey. Elegant coicoi herons glide by on the way to their rookery. A hoatzin, whose topknot resembles a Mohawk haircut, sends out its eerie call. Turquoise and yellow macaws engage in a fierce aerial battle over a seed. 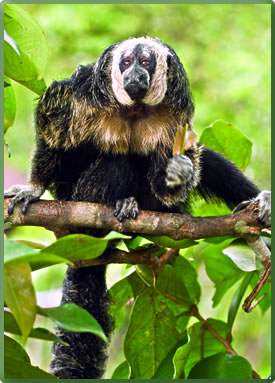 As pink river dolphins shyly poke their rosy backs and snouts through the black water’s surface, their sister gray dolphins gently flip through the water nearby. Other Reserve denizens — giant river otters, tapirs, anacondas, jaguars, and capybaras — remain elusive on this trip. During several night excursions by skiff and on land, we get a hint of the dangers of life after dark as we encounter sleepy-eyed caimans, poisonous frogs, tree boats, giant roaches, and scorpions.

Peruvian Amazon Weather and Physical Challenges
Rain is always a possibility, but there is a dry season (June through November) and a rainy season (December through May) when the Amazon rises and can overflow its banks up to 45 miles inland. At the beginning of the rainy season, the river is still passable and its smaller tributaries are filled so exploring by skiff is easier. Because this area is near the equator, it tends to be hot and humid year-round.

Excursions from the ship are always optional, though most people want to participate in everything even though weather can sometimes be exhausting. Rainforest walks are generally short (20 – 45 minutes), and walking sticks are provided. Plenty of bottled water is provided, but drink prudently as there are generally no bathroom breaks once you’re out in the skiffs. Getting in and out of the skiffs, as well as transferring from La Amatista to the skiffs, requires surefootedness and balance, but there are many helping hands for those who are a bit unsteady.

The Ribereños, fishermen and farmers who live in small communities strung along the riverbanks, welcome us to their villages of thatched roof homes perched on stilts as protection from river flooding. With no running water, only wood-fueled stoves, and a few hours of electricity cranked out by a village generator, Ribereños live a very basic life by our standards. An occasional botánica or medical clinic and a church line the hard dirt streets. Every village we visit has a school.

At Captain Clavero village, quick-to-smile children treat us to a rousing rendition of the Peruvian national anthem at the village school, a circular open-air structure with a thatched cone roof and wood benches. George leads us in our less lofty, but well-received “If You’re Happy and You Know It Clap Your Hands.” We leave school supplies that the village elders will later hand out as a reward for good academic performance. 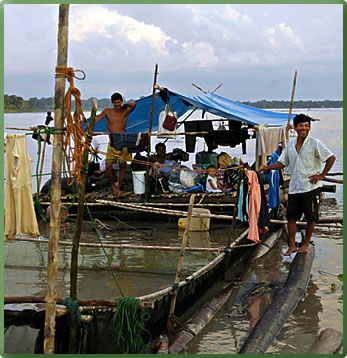 A Ribereño family goes to market on its floating raft home. The raft is trailing an underwater cage filled with armored trout and other fish. ©Susan Stafford 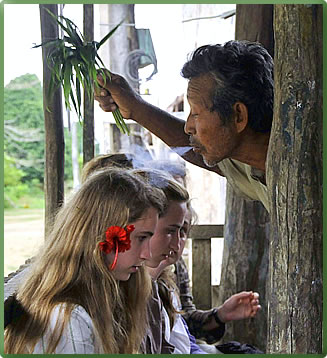 During a nature walk at Yanallpa, a local farmer, Don Francisco, whacks down a palm tree with a few chops of his machete (“his second wife,” as George dubs it). Stripping back the bark, he reveals the creamy white interior, the heart of the palm. George jokes, “Have some jungle spaghetti,” as Don Francisco offers us each a thin rubbery strip.

George has one final surprise for us. At San José de Paranapura village, we sit silently as a shaman blows mapacho (a strong nicotine) smoke over our heads for good fortune and a protective blessing. His teachings about the medicinal powers of local plants such as cat’s claw, oregano, and the hallucinogenic ayahuasca vine remind us that the Amazon Basin is the world’s medicine chest, supplying half of the world’s modern pharmaceuticals. George’s mantra of “Peru is the land of the unexpected,” has proven to be true. Shy river dolphins, squadrons of riotous monkeys and gem-colored birds, and a shaman’s blessings are all unexpected gifts to us from one of the world’s most remote and still unspoiled frontiers. Next visit, maybe I’ll be brave enough to let a pink tarantula take a stroll across my hat.

From July 2013, International Expeditions has been navigating the Peruvian Amazon with the newly built La Estrella Amazonica (Amazon Star). This custom-designed 31-bed riverboat replaces the more rustic, wood-hulled La Amatista, now retired from service. Each 220 sq ft guest room on the new ship has a panoramic window and private balcony for leisurely viewing of the river and passing scenery. Other amenities include a well-equipped fitness room and a high-tech, air-conditioned Lecture Room, home theater system, movies, and a small library.

Award-winning pioneer tour operator, International Expeditions (IE), offers this 10-day cruise package in 2016 beginning at $4,798 pp, double occupancy. Discounts are available for children 7 to 18 years. In-country airfare from Lima to Iquitos is additional. Pricing depends on the month selected for the cruise. Select cabins in 2016 and 2017 have no single supplement! For additional information about this expedition and extension trips, click here.

Philanthropy in the Rainforest: International Expeditions also works to conserve the natural environment and to promote the welfare of local communities where they offer tours. Projects in the Peruvian Amazon include: water treatment plants, an Adopt-a-School program, and support for the Amazon Medical Clinic, the Amazon Center for Environmental Education and Research (ACEER) and the ACEER Canopy Walkway. Learn more about IE’s conservation and philanthropic activities.

Susan H. Stafford is a freelance writer and anthropologist from Alexandria, Virginia, U.S.A. Links to her articles on travel and educational issues may be found at www.susanstafford.net.
E-mail: sstafford26@comcast.net.