You are here: Home / Spain Apartments Vs Hotels 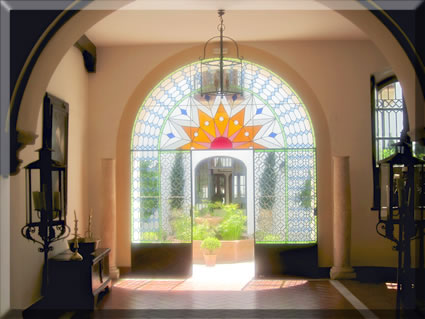 Story and photos by Marianne Scott

Marianne Scott normally specializes in travel writing with a nautical twist. This year, however, she and her husband, David, tried a month as landlubbers while gaining firsthand experience of the pros and cons of self catering apartment rentals. Their research focused on several of Spain’s historic cities: Sevilla, Córdoba, Granada and Barcelona.

I slowly opened the door to the second bedroom in the Sevilla “luxury apartment” we’d rented online. I don’t know who was more shocked, the two women inhabiting the room or me. “Did we rent an apartment or a room?” I asked the young manager, Martina. “It’s a room,” she answered. “It says so at the website.” We were not amused.

When I rechecked the website later, I noted that it was indeed a room, but the language describing it was so ambiguous I had misunderstood (it’s been changed after several complaints). It was our first lesson in apartment rentals abroad. Fortunately, Martina got permission from the landlord, who was in Israel, to move us to another private apartment he owned.

Because my husband, David, had been invited to speak at a fuel-cell conference in Zaragoza, Spain, we combined his travel to the event with a Spanish holiday. We found it a great opportunity to learn about this nation whose ancestry, multiple invasions, deep religious controversies, and past conquests have shaped a unique culture and influenced much in the New World.

In Sevilla, we discovered a 2 a.m. impromptu flamenco concert with guitar, a costumed dancer, and rhythmic hand clapping. We were the oldest audience members.

We wanted to experience Spain’s history, its layers of architecture and its flamenco music and dance. We chose to stay in the oldest cities with their medieval centers, accessible monuments and active cultural life. We knew these streets were inhospitable to automobiles and that parking would be nigh impossible. But by walking everywhere, we could soak up local life, find provisions and explore the warrens of narrow streets.

We also decided to rent various apartments for our month-long stay rather than book hotels only. We’d never rented short-term apartments before so Spain became our guinea pig. Between each of the cities, we decided to take trains instead of go the car rental route.

Just a few blocks from our rented Barcelona digs, Casa Milà is one of Antoni Gaudí’s most famous apartments buildings, built between 1905 and 1912 in Barcelona. It is part of the UNESCO World Heritage Site, “Works of Antoni Gaudi”. I wonder if it has any holiday rentals?

Our most recent hotel room in Quebec City, although in an upscale establishment, offered a single armchair. Thus, when returning fatigued from sightseeing, one of us was forced to rest in bed. “Enough,” we thought. We want to come “home” to a place where both of us could sit, read a book, and gather strength for the next foray.

Food was another consideration. Eating out three times a day gets tiresome and expensive. It takes hours to choose a restaurant, obtain a menu, order, eat and wait for the bill. Moreover, in Spain, dining takes place well after 9:00 pm. Although we try to live as much as like locals when abroad, we found midnight meals difficult to digest. Renting an apartment allowed for meal preparation on our own schedule—and, of course, for caloric monitoring.

Finally, friends had mentioned apartment stays were less costly than hotels, especially when factoring in the ability to cook some meals.

Apartment rental has become a popular way of travel and myriad websites are eager to connect you to a landlord. Just type “apartment rental in Córdoba” or another city and dozens of sites pop up. Sites range from houseboats to castles. It was easy to find places to rent, although that said, it’s time consuming to check through all the sites, locations and photos. And each site has a different way of collecting rental fees.

I quickly learned the rental rules. Most landlords want you to stay at least three days. For us that meant we’d look for apartments in Sevilla, Córdoba, Granada and Barcelona, while staying in hotels in Toledo and Zaragoza. Certain apartment owners charge cleaning fees while others charge a registration fee. 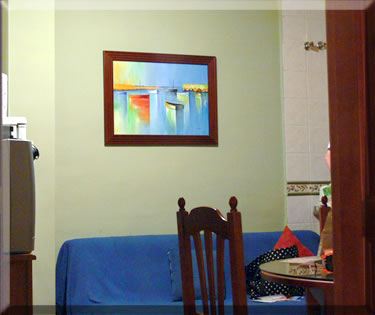 A glimpse of our small Granada apartment that combines living room sofa, dining room and kitchen, all in one space.

Some people rent rooms in their home; others have invested in independent apartments. All apartments describe how many people can sleep there. For central-city locations, accommodation for four usually includes one bedroom and a hide-a-bed in the living room. North Americans used to large rooms will learn that European quarters are usually much smaller. All apartments we rented included a washing machine (no dryers)—so we took far fewer clothes. The wonders of Google Earth show you where each apartment is located.

Our Sevilla apartment cost $95 per night, rented through www.airbnb.com. It was sparce—not even a salt shaker or coffeemaker. I doubt the landlord ever cooks so he’s unaware of minimum requirements in the kitchen. That said, Martina, who looked after guests, was marvellous. When asked, she brought salt and a coffee maker (“I always use instant,” she said). She told us about goings on in town which let us discover a superb flamenco-jazz concert in a tiny neighbourhood tavern. She showed up after the hot-water boiler above the kitchen sink broke and flooded the apartment. Together, we mopped and dried the floor and rug; it certainly reminded us of home ownership.

If you can’t dance the flamenco, you can at least bring home a brightly-colored flamenco apron.

We rented our second apartment, in the historic section of Córdoba, through www.homeaway.com. Our landlady, Carmen, lived in the apartment above us and our place was clean and charming. It was typical of traditional Spanish apartment buildings—built around a central court yard filled with plants and a fountain. Cost was $110 per night.

Carmen knew what it takes to make clients feel at home—nice towels, shampoo and adequate pots and pans. She also had guides and pamphlets on Córdoba activities waiting for us. The supermarket was a block away and a bakery offered great breads. We were lucky—the weekend we visited offered a dozen flamenco shows all around the city, free of charge. Fabulous.

I wandered for hours in the nearby Mezquita, a great mosque built between 784-987, with 856 columns supporting red-and-white arches (and a Renaissance Catholic cathedral plunked right in the middle). It’s one of the most beautiful spiritual places I’ve ever visited. Granada was next. Again using www.airbnb.com, we found an inexpensive apartment (±$72/night) in the heart of the historic district. Everything was at hand: supermarket, bakery, restaurants, the Alhambra.

The apartment was tiny but the usual courtyard had rattan chairs where we drank our coffee and ate our lunch. The apartment’s owner, Chris, was very helpful, told us about free tapas, and managed to get us tickets to a bullfight one evening (an experience I won’t repeat). We’d pre-ordered tickets to the Alhambra and visited that famous site on a blisteringly hot day.

A decorated gallery of the mid-14th century Alhambra palace with a view of Granada beyond.

During our next two stops, we stayed in a Toledo hotel and at the conference hotel in Zaragoza. It was pleasant to have someone else make the bed, but we learned we appreciated the freedom that an apartment provides.

We spent our final five days in Barcelona, where we rented the last apartment (±$170/night). It belonged to a Polish fellow away for the summer. Again, sparingly furnished. Maybe the intense social life that takes place in Spain around restaurants and bars entices people to spend little time at home.

Barcelona is a huge city so there are many districts. We took the bus and walked for hours. I particularly enjoyed the extravagant Gaudí architecture, the harbor, the widely diverse building styles, the public art, the ubiquitous churches.

Break dancing is not confined to North America as demonstrated by some energetic young men entertaining a crowd in Barcelona.

In comparison to most North American living quarters, Spanish apartments are small—especially if you rent in historic city centers. They are generally noisier, due to the stone walls, tiled floors and close neighbours. Older buildings lack elevators and those suitcases do get heavy. Renting downtown means no cars as there’s no parking. That said, even if you choose a hotel room in the historic quarters, your room is likely be equally tiny—unless you spend significant euros (our conference hotel, which was paid for, averaged about €179/$250 a night).

What we liked about the apartments was the ability to lounge around when we were tired. We liked strolling in the neighbourhoods with the locals. We liked being able to cook some of the time and make a few pots of coffee. Three apartments offered wi-fi. 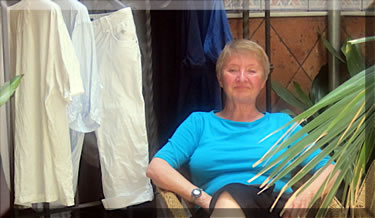 The author confirms that one advantage of apartment rental is having a washing machine for laundry.

Would we rent apartments again? If we were to spend more than a couple of nights in a city, we’d consider it seriously. Next time, though, we’ll likely spend a bit more for a few extra amenities.

Based in Victoria, British Columbia, Marianne Scott writes for numerous publications in the U.S., Canada and the UK. She also writes as a volunteer for some non-profit organizations. She’s the author of Naturally Salty — Coastal Characters of the Pacific Northwest, and Ocean Alexander, the First 25 Years. Her email is mariannescott@scottpoint.ca.
Enjoy other articles by Marianne Scott in our feature article collection:
A Walk Through Berlin’s Public Art
An Annual World-Class Music Festival on British Columbia’s Remote Pacific Coast
Geological Adventures in Utah’s National Parks
An Exploration of Oregon’s Coast
Tips For Safe Sane Travel